Mark's column in BBC Wildlife magazine – My Way of Thinking – explores current conservation dilemmas and is as provocative and insightful as his popular Wild Thoughts, which ran between January 2004 and October 2015 (scroll down to click on any of those).

His previous monthly column for the magazine At a Glance usefully demystified some of the most important issues affecting the world's wildlife, assessing the organisations that protect it and suggesting what can be done (click on any month below between April 2016 and June 2018 to read).

Bringing species back from extinction

Ban all industrial fishing on the high seas

Why roadblocking to protest is not the answer

Stop the animal cruelty in 'I'm A Celebrity'

Why there is no need to cull badgers

Cetacean slaughter in the Faroe Islands

Save our green belts

Jair Bolsonaro and the Amazon rainforest

The ever-present threat of climate change

The problem of England’s polluted rivers

UN’s report on the tragic state of the natural world

Shooting at sharks in the Pacific

Why dams are a disaster for wildlife

The US's assault on environmental legislation

The impact of COVID-19 on wildlife

Paying farmers to protect wildlife, not to own land

Should cormorants be culled in the UK?

How reliable are headline-grabbing statistics?

Sky lanterns and the problems they cause

The problems of population growth

The controversy of the badger cull

The sharp decline in global biodiversity

The financial world’s influence on climate

Should we save near-extinct species?

The billions being raised to save Notre Dame

Why conservation groups should co-ordinate

Impact of global warming on oceans and whales

US conservationists' fight of their lives

We are losing more than we are saving

Conservation is not at all expensive

Leaving everything too late

Dying for the environment

Plastic in the Oceans

Law of the Sea 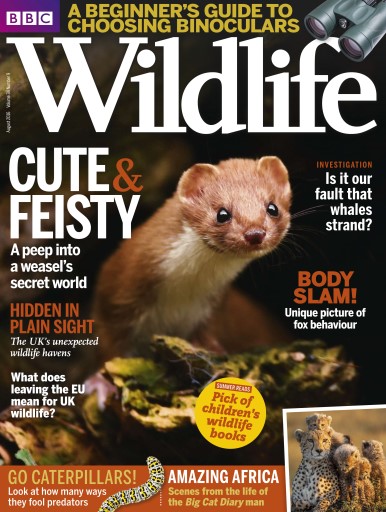 October 2015
How do we balance encouraging people to watch wildlife with protecting the very places they come to see?
September 2015
Global condemnation of the killing of Cecil the lion proves that the tide has turned against trophy hunting
August 2015
The IUCN's latest figures reveals 22,784 species of plants and animals to be threatened with extinction, which is the tip of the iceberg
July 2015
How Australia is rapidly becoming one of the least environmentally friendly countries in the world
June 2015
The Green Party's shameful lack of a clear environmental message during the General Election
May 2015
The importance of cherishing one of the most innovative bits of legislation we've ever had: our green belts
April 2015
Madagascar's wildlife and habitats are at huge risk (more than 90 per cent of its original forest is now gone), and the world needs to take notice
Spring 2015
Why did a bowhead whale – an inhabitant of the frozen north – appear off Cornwall?
March 2015
The US Fish and Wildlife Service's dilemma over shooting the barred owl to save the endangered spotted owl
February 2015
Government ministers ignore scientific advice time and again as if it's an optional extra
January 2015
How Ian Botham's attack on RSPB has nothing to do with caring for birds – it is all about hunting

December 2014
In less than 20 years, we have lost 88% of our turtle doves, 49% of our cuckoos, 43% of our nightingales, 40% of our swifts, and much more
November 2014
The perils of 'ghost fishing gear' – tonnes of lost fishing nets, lines and traps – that kills millions of animals each year
October 2014
Today's extinction rates are far worse than previously thought, not helped by how the Western world is governed
September 2014
Industries that condone the use of whales and dolphins for commercial purposes
August 2014
The first hand-reared spoon-billed sandpiper is returned to its breeding grounds – only 2,444 Critically Endangered other species to go
July 2014
Scotland is home to four million seabirds, but very little is being done to protect them
June 2014
Good news to report from China – a bear-bile farmer has turned his farm into a big rescue centre
May 2014
An historic ruling by UN's highest court means that for the first time in years we can feel cautiously optimistic about the future of the world's whales
April 2014
How long can we keep endangered wildlife populations alive while we wait for attitudes in China to change?
Spring 2014
Exploring the idea of giving some species the legal right to life and liberty
February 2014
The politics of whaling in the light of the Icelandic government announcing its new whaling quotas
January 2014
The ridiculous claims made about wolf attacks and how they are demonised worldwide

December 2013
How legalising the international trade in rhino horn may cause an explosion in demand
November 2013
The UK's scandalous badger cull was fuelled by misinformation from MPS and the NFU, and an unquestioning media
October 2013
How responsible shark-diving benefits sharks, making them worth more alive than dead
September 2013
How companies jump on the eco-band-wagon for their own benefits
Summer 2013
The worrying state of UK's wildlife and how we desperately need a wildlife-friendly government
July 2013
The implications of injecting dangerous chemical cocktails into rhino horns to make them worthless to poachers
June 2013
The worrying, but understandable, levels of corruption among wildlife rangers throughout African and Asia
May 2013
President Obama's big opportunity - either to unleash a huge carbon bomb or show he is serious about cutting greenhouse emissions
April 2013
How boycotts rarely work - they didn't stop whaling in the Faroes, and they're not going to stop Japan, either
March 2013
It should be headline news, but the lion's plight is passing the world by unnoticed
February 2013
Why does the Government repeatedly ignore good scientific advice, especially to do with the Common Fisheries Policy?
January 2013
Given the uniqueness of Madagascar, why isn't more being done to save this fragile paradise?

December 2011
Population growth is the elephant in the room that governments choose to ignore
November 2011
How, under President Obama, the US is in the middle of one of the worst assaults on the environment in recent history
October 2011
The pointless (and cruel) Chinese fad for keyrings of mini plastic sacs of water containing live newts, turtle hatchlings or fish
Autumn 2011
The drama of an Arctic scientist, Kafkaesque government agencies, oil giants, climate-change sceptics and polar bears
September 2011
How the demand for whale meat in Iceland is generated by tourists
August 2011
Why we need to be sympathetic in our approach to the conservation of potentially dangerous animals
July 2011
Good news - there has recently been an unprecedented outcry against bear-bile farming
June 2011
What does a webcam of nesting bald eagles with 11 million viewers actually achieve?
May 2011
Palm oil plantations could be the biggest threat to the greatest number of species on the planet
April 2011
The plight of a precious population of spiny seahorses in Studland Bay, Dorset
March 2011
Sad fact - there are so few survivors of a range of endangered species that researchers know them by name
February 2011
Whaling and how we need more whale devotees in Japan, Norway and Iceland to change attitudes from within those countries
January 2011
The thylacine - “the world’s most common extinct animal” - is a classic case of only appreciating something after it has gone

December 2010
Environment ministers from 193 countries discuss in Nagoya, Japan, the world’s nature crisis and make, as usual, no progress whatsoever
November 2010
The issues surrounding the use of mammoth tusks in lieu of elephant ivory
October 2010
Mark has just returned from filming in Lousiana about the Gulf oil spill and reports how BP is covering up the true extent of the damage done
Autumn 2010
The arrogance of oil companies operating in the developing world
September 2010
The Tanzanian Government's flawed plan to build a commercial highway through the northern end of the Serengeti
August 2010
How anti-poaching patrols are the unsung heroes on the conservation frontline
July 2010
Why the Indian government must not phase out tourism in tiger reserves
May 2010
The appalling annual seal cull that still continues with Canada's blessing
April 2010
The preposterous plan to legalise whaling for the first time in 25 years
March 2010
Some species' reintroductions appear to be little more than high-profile publicity stunts
February 2010
How subtle and unpredictable many of the impacts of climate change are likely to be
January 2010
The importance of scientific research for conservation action

September 2009
The impact of eco-tourism on wildlife hotspots
August 2009
Why shark nets do more harm than good
Summer 2009
Politicians and their ill-informed take on badgers and TB in the UK
July 2009
Mark's take on the BBC2 conservation series, Last Chance to See

December 2006
Alternative Nobel Prize ideas
November 2006
The death of
Steve Irwin
October 2006
The debate on splitting species
Autumn 2006
Lack of concern for the lion's plight
September 2006
The trouble with the EU
August 2006
Most endangered species will vanish before we know they exist
July 2006
Politicians and conservation
June 2006
Our responsibilty for unnatural disasters
May 2006
British Columbia's Great Bear Rainforest: saved?
April 2006
Our perception of whales and whaling
March 2006
The fish-stock crisis
February 2006
Hot air – the
climate-change debate
January 2006
Climate change and wildlife-watching